“Wet stacking” is a widespread phenomenon that generally occurs in diesel engines that are operated at low load or with no load for extended periods.

When a diesel engine operates at low load or with no load (low-load operation less than 30% or idling) it does not achieve its normal operating conditions. In particular, the relatively low pressures in the cylinder at low load mean that the piston rings do not sit perfectly against the cylinder liner with the result that an increased amount of oil enters the combustion chamber and, subsequently, the exhaust tract.

Consequently, oil collects in the exhaust system where it mixes with the carbon present and forms a jet black liquid. When higher loads and the resultant higher exhaust pressures occur, this liquid leaks from the exhaust system giving the impression of an oil leak.

However, a comparison between this liquid and engine oil will often show that the engine oil is a different colour.

The picture below shows wet stacking leakage and engine oil side by side, you can see the difference. 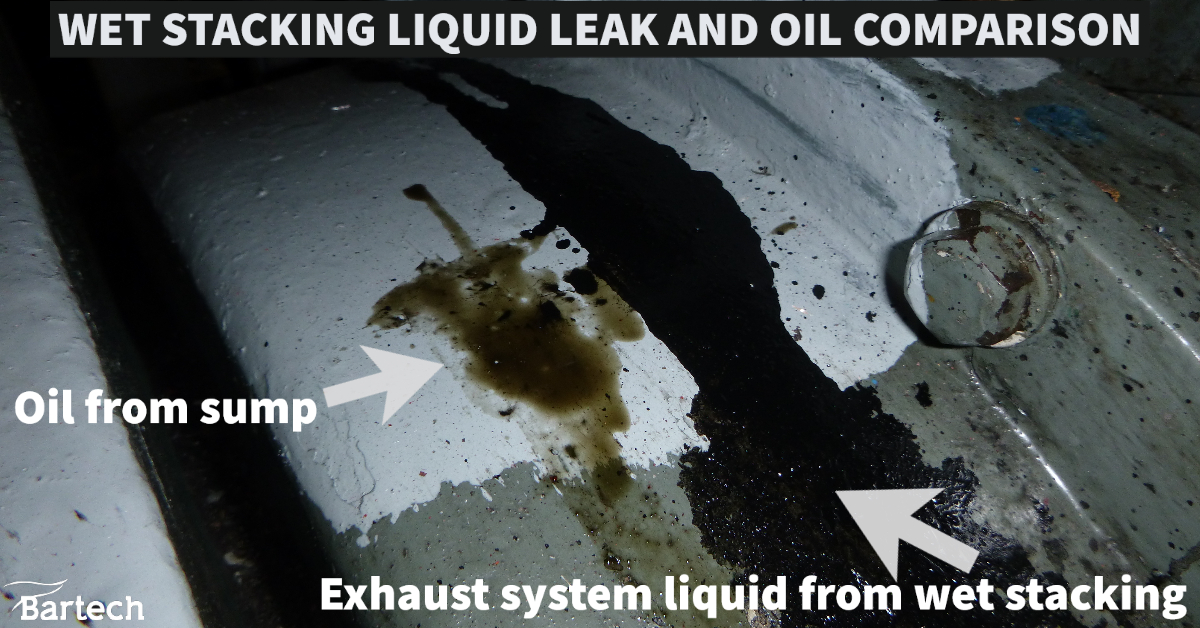 Engine operation is possible at all loads and speeds at all times and is not influenced by these oil leaks.

Such applications require test runs every month (or even more frequently). For safety reasons, however, these tests are often not conducted under real operating conditions and the engine is simply operated at idling.

If these low load/idling runs continue over an extended period, `wet stacking´ can result.

Wet stacking can be avoided if the monthly test run is performed as per operating instructions and maintenance schedule with a higher load until operating temperature is reached.

Various possibilities are available to avoid the problem of wet stacking.

These include intelligent load management designed to keep the engines operating within their optimum load range. This must be identified on an application-specific basis.

A second possibility that offers a short-term solution to the problem is operation at a higher load (>70%) over an extended period (depending on the amount of oil that has collected).

Depending on the amount of oil present, the runtimes required may be an hour or more. The oil which has collected burns in the higher temperatures which build up in the exhaust tract.

Initially, this results in greater exhaust gas emissions but this decreases over time (depending on the oil quantity involved) and the exhaust gas normally returns to its usual opacity.

Operation at high load can be discontinued once opacity has returned to normal levels.

If you have any concerns regarding the health of your engines or maintenance schedules, get in touch now, we are here to help.

Have you heard about Bartech's Green Box Solution?