A while ago we commissioned a couple of Detroit 16V71 engines, along with their gearboxes, when we came across a problem:

We weren’t getting ANY oil pressure from one of the engines!

This came as a surprise, as we had carried out a full overhaul and bench-tested the engines, all witnessed by DNV.

The engines had been sat dockside for a few months since the overhaul, but were well protected and hadn’t been exposed to the elements.

When commissioning the port engine, it ran up as expected with no issues, but we encountered the problem when we came to the starboard engine.

As you’ll understand, it’s vital to ensure that critical performance information is constantly monitored when starting an engine, to ensure everything is as it should be.

And this is what we found on the gauge panel: 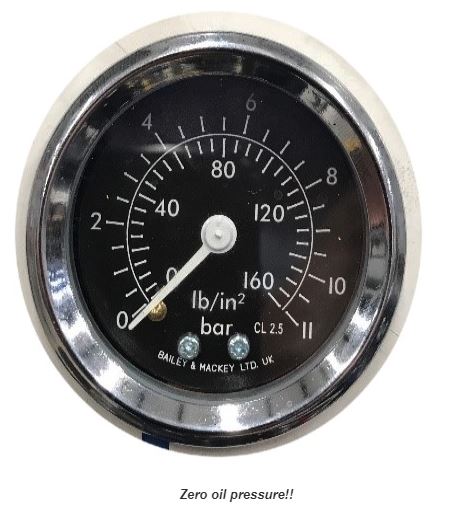 As our commissioning engineer was paying close attention to the feedback, he was able to shut it down within 20 seconds.

The first thing to check was the gauge, to make sure it was giving reliable information. To do this, we could swap over from the port engine.

The engine was restarted, but no change, so again it was quickly shut down and the feed pipe to the gauge was checked for blockages. None were found.

Looking back over the oil system from the pump, it went through the filters, then the cooler, so the next step was to remove the oil filters.  Checking them, there was evidence of oil passing through, but not as much as expected.

Refitting the filters and restarting the engine, the pressure went straight up to 40 PSI.

So, what was the cause?

Most likely, there was air in the system that was released during the removal of the filters.

When starting an engine, make sure you have this information available, because if this engine had been run without oil circulating, it would have seized up, causing significant (and costly!) issues.

If you need help being able to access critical engine information, there are various solutions available, such as customised engine gauge panels, so contact us and we’ll find you the best solution.

Have you heard about Bartech's Green Box Solution?